At the end of each year we Award our School Values Award.  The winners are chosen by the children who vote for someone in their Year Group who has followed our Values of Honesty, Trust, Friendship and Forgiveness throughout the school year.

They are very special Awards and we are so proud of all our winners.

This term to link with our Christian Value of Perseverance Year 3 have been taking part in some prayer space activities. They had to persevere playing quoits and solving rubix cube problems. This took a lot of perseverance. They also thought about who would help them during times in which perseverance is needed. 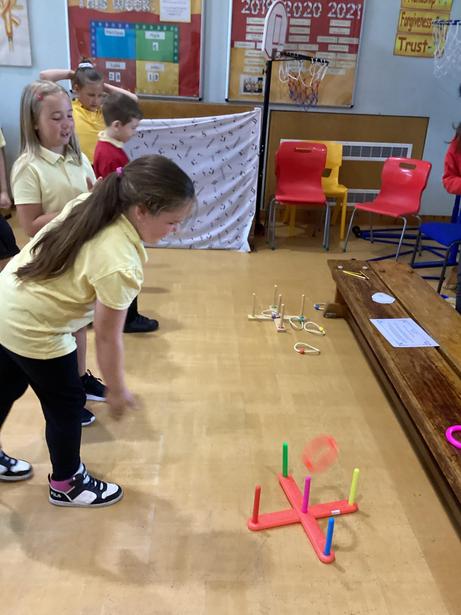 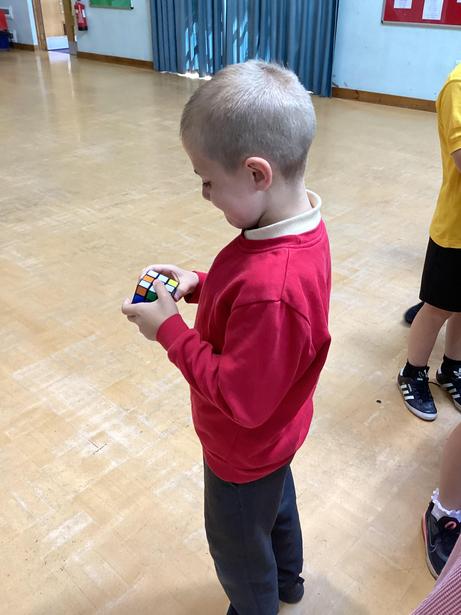 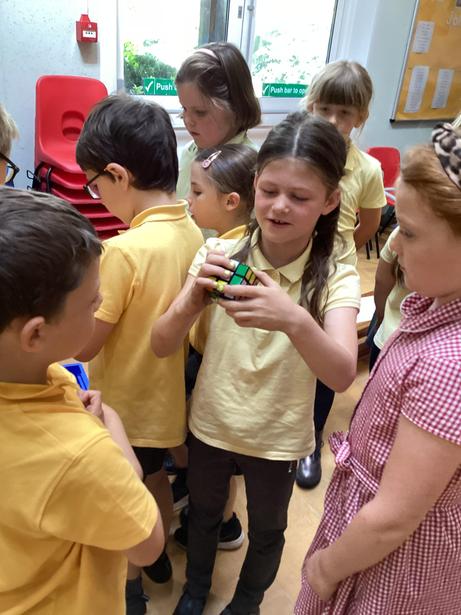 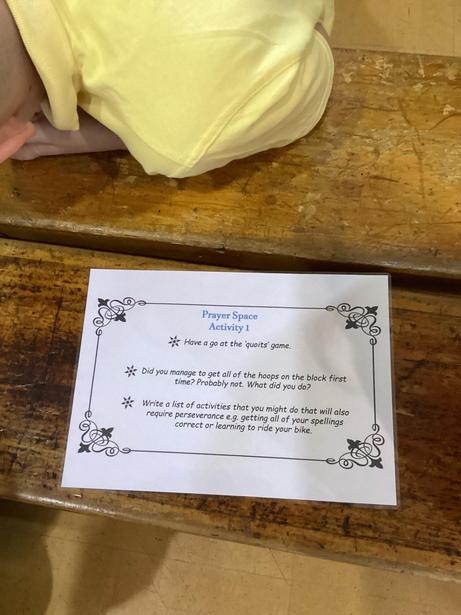 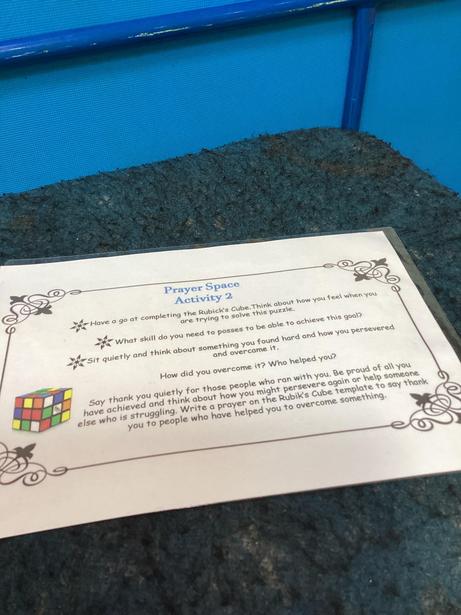 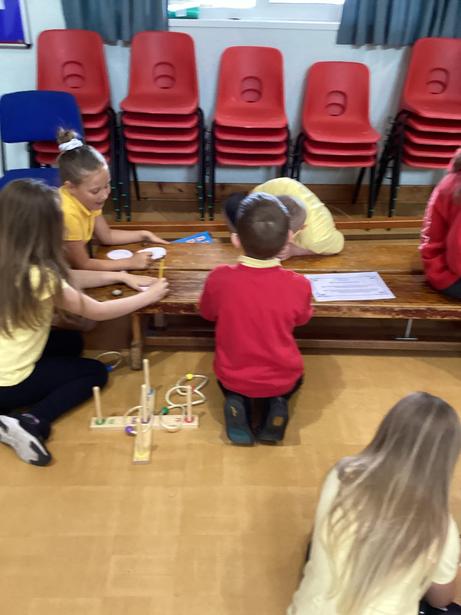 This week at school we are celebrating The Queen's Platinum Jubilee. We began the week by thinking about how important her Christian Faith has been to her throughout her life.

The Queen understands how important her faith has been during the good times and the bad. The Queen believes in the importance of prayer in her daily life and understands that Jesus was sent to earth to serve, not be served. This is a great way to describe how the Queen sees her role – to serve the country rather than being served by it.

On Monday the Bishop of Durham visited us at school. He lead our worship and then chatted to some of our Year 6 children about what life is like for 11 year olds at the minute. We then came together with some other schools at St Paul's Church to celebrate the one year anniversary of the Way of Learning - one of the Northern Saints Trails. Bishop Paul then lead a service and we then took part in some interactive prayer activities. 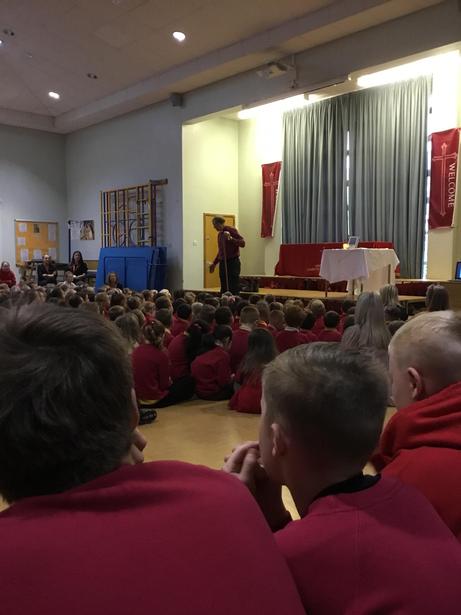 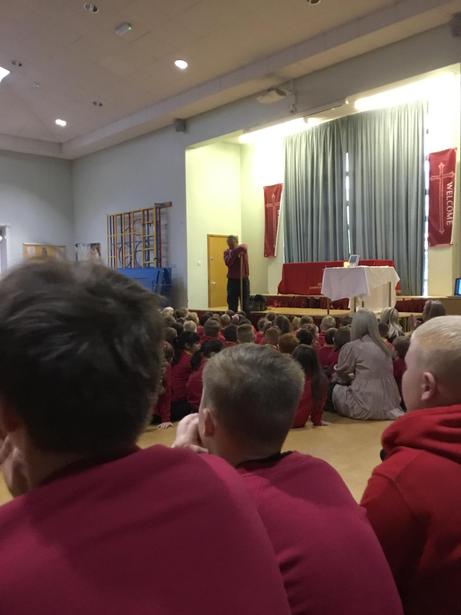 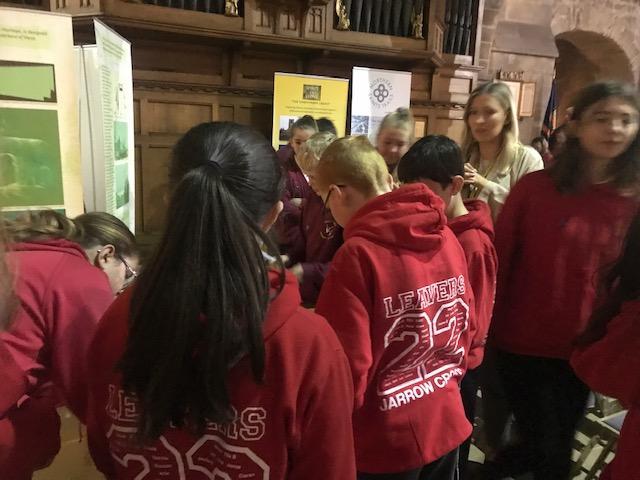 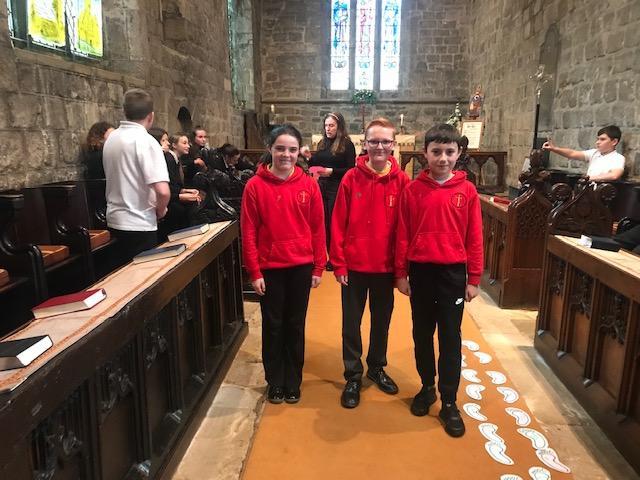 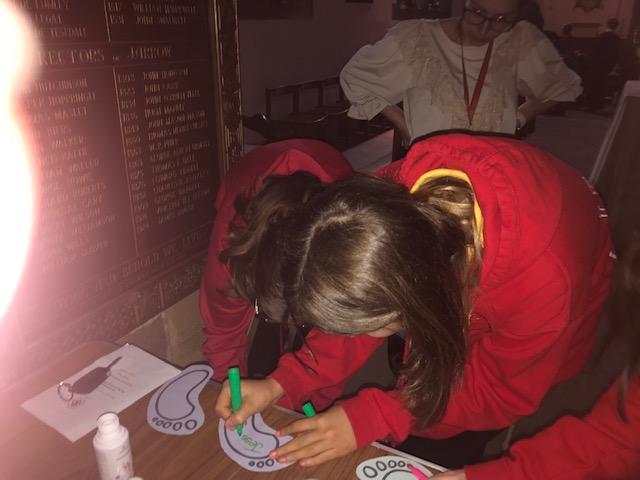 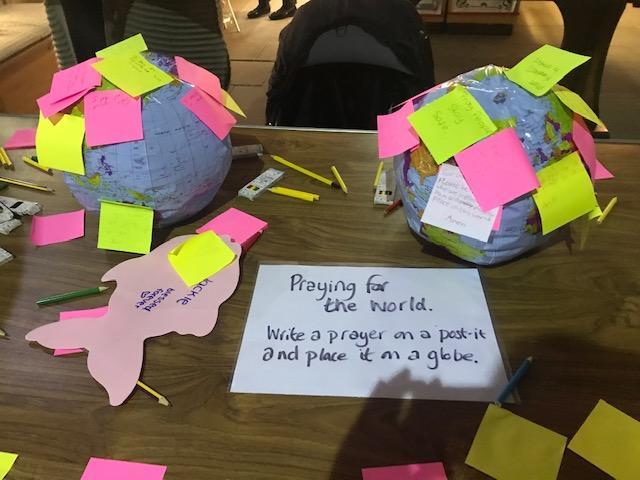 Learning about Refugees and Asylum Seekers

On Wednesday Hannah from South Tyneside Council came into school to talk to us about Refugees and Asylum Seekers. She explained why and how people become refugees and why people seek asylum in many countries including the United Kingdom. She reminded us that over the years many people have become refugees including Mary and Joseph when they fled to Egypt when Jesus was a baby to escape King Herod.

Miss Elcoate will be working with some children to create a pack of information to help children settle into South Tyneside.

On Wednesday members of the local church Community came into school to lead our Holy Trail. During the Holy Trail we remembered the last week of Jesus life.

We took part in activities to help us remember Palm Sunday, Jesus washing the feet of his disciples, The Last Supper and finally Jesus' arrest in the Garden of Gethsemane. 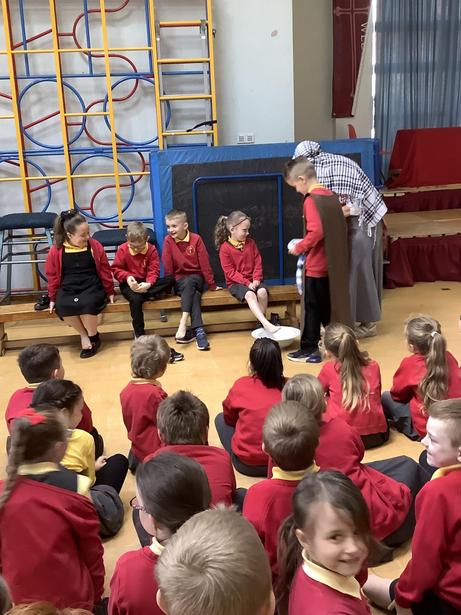 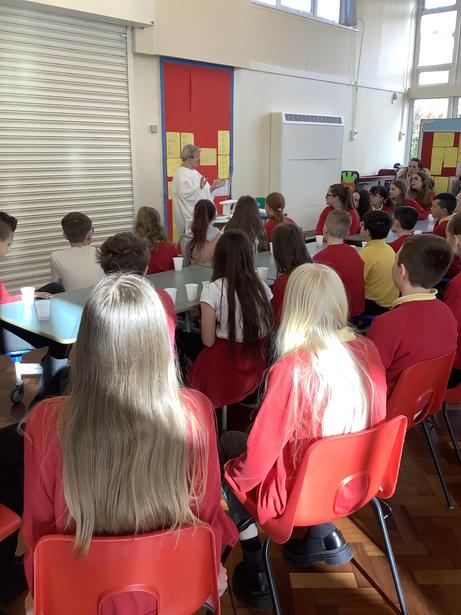 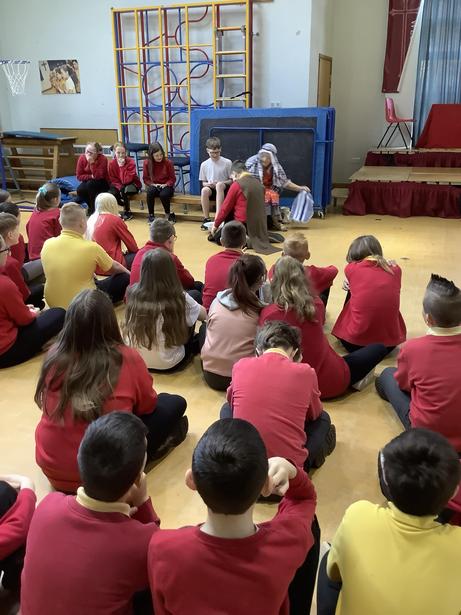 Some of Y3/4 children attended an event held at South Shields Town Hall to help understand about Democracy and what it means. They listened to the imaginary town of Staryland’s needs, heard the candidates make speeches about what they would do if they were in charge and then voted for the candidate who they believed would make the best leader.  Once the votes had been counted they then listened to the winning leaders closing speech and were  invited to look around the mayor’s chambers by the mayor herself! 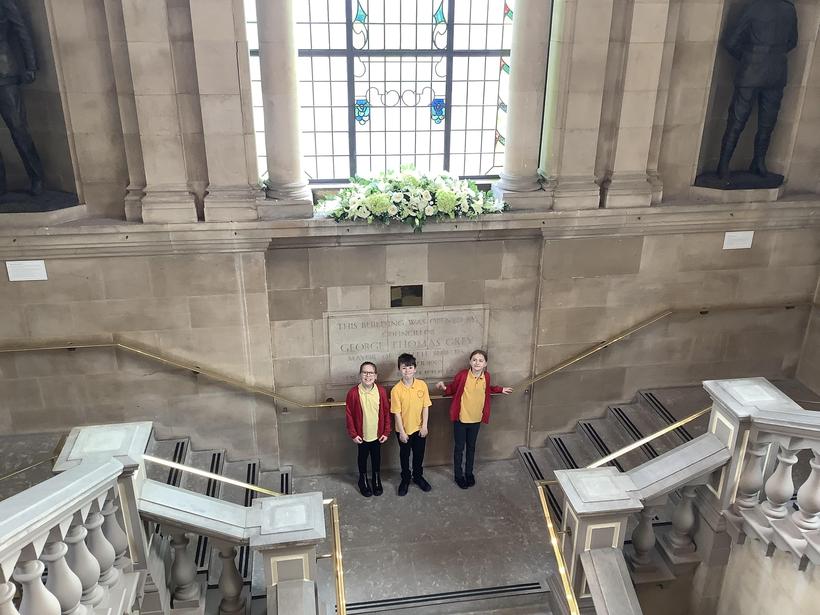 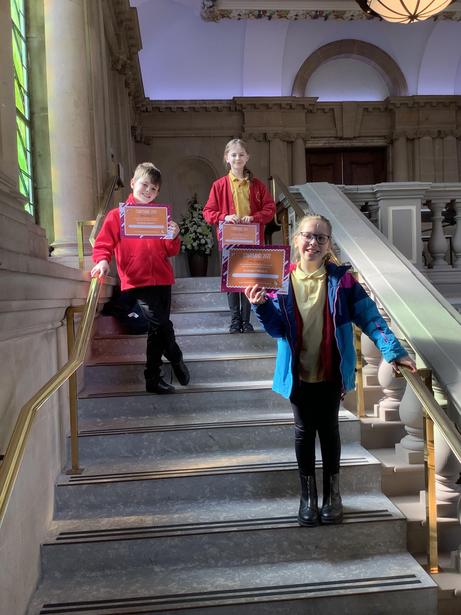 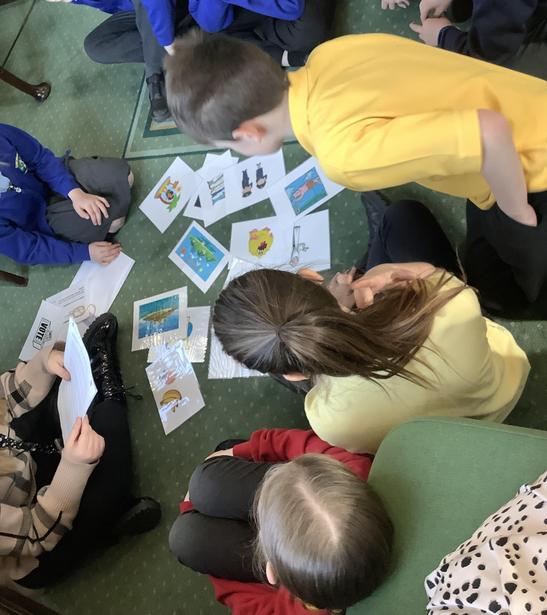 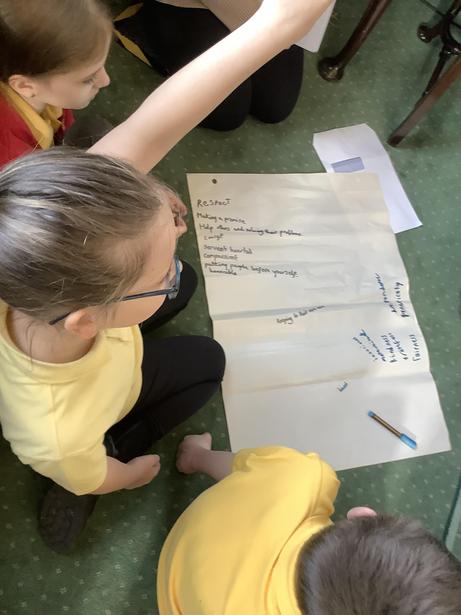 Last Friday was Comic Relief. Although we had great fun and raised money by  buying red noses and wearing something red , we also thought about the many people who are not as lucky as we are. To help us to do this we placed lots of cardboard boxes in the hall which to helped us think bout people who do not have a home. We then wrote on post it notes our feelings about what it must be like to be homeless and also our hope for the future that homelessness will become a thing of the past.

As part of their RE lessons Y3/4 discussed  a variety of different charities they could raise money for and how they could do this.

As they had been talking a lot about how it must feel to be homeless they choose Changing Lives a charity which supports vulnerable people. They asked for penny donations, made a penny trail around school and raised £115.02. The charity were delighted with their efforts and are coming in to talk to us during assembly very soon.

On Ash Wednesday Reverend Lesley came in to talk to us about the  importance of the day in the Church Calendar.

She told us that it is the time before Easter when Christians think about how they can improve their behaviour. She also told us that the ashes are a symbol of being sorry for things they have done.

She drew a cross made from ash on the hands of some children.

Have a lovely holiday and we will see you on Tuesday 6th September!
Top
Cookie information
Cookie Notice